WOOD CUBICLES is a state-of-the-art corporate furniture resource for companies wishing to bring a warm and comforting environment to their employees.

For many decades now, cubicles have played a vital role in creating individual workspaces for as many people as possible, in the least amount of space as possible. Wide open oﬃce space could be transformed in only a day or two into dozens or even hundreds of individual oﬃces. Wood Cubicles has revolutionized this concept in its own way by making them beautiful. No longer do cubicles have to be cold, boring and institutional. By adding the warmth and beauty of real wood, Wood Cubicles make it possible to LOVE what surrounds you.

Danny’s history as a woodworker and entrepreneur (as detailed in our story below) is one small evidence of his sense of commitment. He has been married to Suzanne for over 25 years and believes his life mission is best in four words: Make God look good. When he’s not pondering the next LimbCraft leg or racing to the next meeting, Danny enjoys bowhunting, ﬁshing, traveling and spending time on mission work teams. He has worked on multiple teams in Russia, doing construction for churches, building beds for orphanages and equipping a wood shop for a teen orphan ministry. Danny has also served with work teams traveling to a Christian Camp ministry in Spain called L’Arcada, the namesake for one of our most popular furniture legs. Wood Cubicles is proud to support the two missionary families who founded L’Arcada with a portion of the proceeds from every L’Arcada leg we sell. 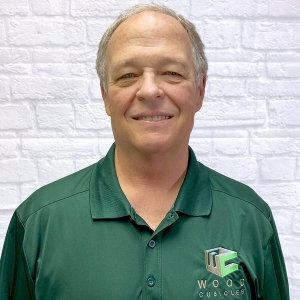 Woodworking began for Larry in junior high and high school shop classes, while with some beloved shop teachers. Through college he worked for contractors and in his late 20’s went into contracting, himself when Larry did some custom woodwork. After contracting he was responsible for the design of lending systems for financial institutions, as well as designing the system for a national leasing program for their banking machines. Larry has been happily married with his wife Lynn for 25 years. 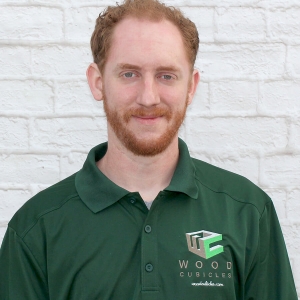 Lucas Ferrell has been involved in one creative pursuit or another since the day he stumbled upon a toy Yamaha keyboard in the attic of his boyhood home. Woodworking entered the scene when he began building large skate ramps for he and his friends. Lucas attended Southern Methodist University where he earned a Bachelor of Arts in English Literature while playing trombone in the SMU Mustang Band. His passion for projects both technical and aesthetic found a home in the world of Computer Aided Machining and furniture design in 2013, when he joined forces with Danny Jackson. His commitment to a lifetime of learning drives Lucas to seek innovative and attractive solutions for evolving workspace needs. Outside of the shop, Lucas enjoys rock climbing, billiards, and live local music.

WOOD CUBICLES is a state-of-the-art corporate furniture resource for companies wishing to bring a warm and comforting environment to their employees.

The Wood Cubicles story began in October, 1998, when CEO Danny Jackson chose Vine & Branches Fine Woodworks as the oﬃcial business name for his new venture into professional woodworking. He had acquired an a affinity for sharp tools, even before he was too young to have one…yes, there’s a story there and it has something to do with his ﬁrst pocket knife. And the next door neighbor’s freshly tar-papered boat shed. To the great embarrassment of his father, Danny & his only slightly older brother tried out their new pocket knives on Mr. Robert’s shed. It turns out that even the smallest pocket knife can very quickly and eﬃciently cut intricate shapes when plunged into tar paper that’s tightly stretched around a wooden frame. Who knew?

Over the twenty plus years since hanging the ﬁrst Vine & Branches sign, Danny’s love for the craft has only grown stronger. The woodworking projects over those years have ranged from the simplest bookcase to kitchen cabinets and oﬃce built-ins, to his personal masterpiece: the steam-bent SleighRocker rocking chair, which he built for a juried design show in Jackson Hole, Wyoming. Some years later, an idea for mass-producing the SleighRocker came to him, an idea which he researched, prototyped, and perfected — and he ultimately earned a US Patent for the manufacturing technology. Soon thereafter, an investor joined him to begin putting the technology to work in manufacturing SleighRockers. The new company was formed  as Mono-Parts Technology LLC, still doing business as Vine & Branches Fine Woodworks, as well as The SleighRocker Co. Almost as quickly as the production jigs were built and the the ﬁrst runs of chairs were completed, the work came to a sudden stop when a 4-alarm ﬁre consumed the plant in late 2017. Another thing that had been quietly taking place in the few months prior to the ﬁre was fulﬁllment of an order for a ﬁrst-of-its-kind wood cubicle arrangement. In the aftermath of the ﬁre, the decision was made to employ the patented manufacturing technology into new and vibrant corporate furniture designs, including wood cubicles. Since then, the Wood Cubicles brand and its exclusive LimbCraft™ brand of interchangeable legs have taken shape as the line of furniture you see now.

So what happened to the SleighRocker? Since all focus was turned to manufacturing furniture for the corporate environment and all the production ﬁxtures for the SleighRocker were destroyed in the ﬁre, SleighRockers are now manufactured in a limited run, only once per year. If you are interested learning more or ordering one of your own, you can do so at SleighRocker.com.